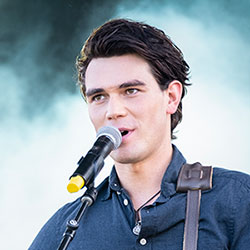 KJ Apa is originally from New Zealand and is known for his star role in the TV series RIVERDALE, an adaptation of the characters from the Archie comic book series. KJ also starred in the feature film A DOG’S PURPOSE, alongside Britt Robertson, who also is in I STILL BELIEVE, along with Dennis Quaid (I CAN ONLY IMAGINE). KJ has been nominated for a Saturn Award, an MTV Movie & TV Award, and won a Teen Choice Award for Choice Breakout TV Star. KJ is also a musician who plays guitar and piano. At the age of 14, he recorded his first album and now is a member of the band Legend. He has performed at Coachella, Teen Vogue’s Young Hollywood party, and has performed on-screen in his role as Archie on RIVERDALE. Despite his status as a heartthrob, KJ is staying grounded. When asked recently by Elle.com what he does to handle his newfound fame, he answered, “I'm a Christian, so my relationship with my spiritual side and relationship with God is everything to me.” 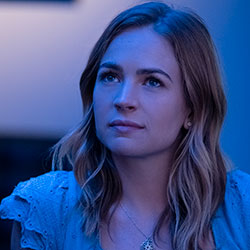 Britt Robertson currently appears as the lead young lawyer on the ABC show FOR THE PEOPLE. She played the title role in the series GIRLBOSS, which is currently streaming on Netflix. Britt’s features include THE SPACE BETWEEN US and A DOG’S PURPOSE (with KJ Apa and Dennis Quaid). Britt was the lead in MR. CHURCH opposite Eddie Murphy that premiered in 2016’s TriBeCa Film Festival. She played Julia Roberts' daughter in the Garry Marshall movie MOTHER’S DAY and was in the highly acclaimed Hulu show, CASUAL. Britt was awarded the 2015 Star of Tomorrow at CinemaCon when she had back-to-back movies in theaters: she was the lad in the Nicholas Sparks adaptation of THE LONGEST RIDE, and was in Brad Bird’s Disney feature film TOMORROWLAND opposite George Clooney. She also had a role opposite Jennifer Aniston in the feature film,CAKE. Britt previously played the lead in THE FIRST TIME, which premiered at Sundance, and starred in Dreamworks’ DELIVERY MAN opposite Vince Vaughn. Britt was a series regular on the first season of the Dreamworks/CBS hit show UNDER THE DOME. She previously starred in two CW series, THE SECRET CIRCLE and LIFE UNEXPECTED. 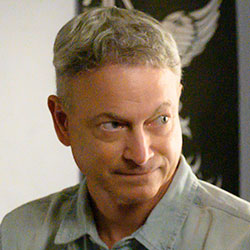 Gary Sinise was born in Blue Island, Illinois, to a family who supported his artistic endeavors, and encouraged his ambition to create. Gary has been nominated for three Tony Awards during his critically acclaimed career in theatre as an actor and director, including one for his role on Broadway in ONE FLEW OVER THE CUCKOO’S NEST. Gary’s portrayal of Lieutenant Dan Taylor in the Oscar®-winning film FORREST GUMP earned him nominations for Academy Award®, Golden Globe, and Screen Actors Guild awards. Other notable films featuring Gary include APOLLO 13 opposite Tom Hanks and Kevin Bacon, RANSOM with Mel Gibson, THE FORGOTTEN with Julianne Moore, IMPOSTER, IT’S THE RAGE, REINDEER GAMES, MISSION TO MARS, THE GREEN MILE, A MIDNIGHT CLEAR, JACK THE BEAR, THE QUICK AND THE DEAD, and THE BIG BOUNCE. Gary’s directing credits include OF MICE AND MEN, which he co-produced and co-starred in with John Malkovich, as well as MILES FROM HOME. His award-winning performances on television include TRUMAN (Golden Globe, CableACE, and Screen Actors Guild) and GEORGE WALLACE (Emmy, Screen Actors Guild, and CableACE). Additionally, he is known for his TV roles in CRIMINAL MINDS: BEYOND BORDERS and CSI: NY. In 2011, he launched the Gary Sinise Foundation to honor the nation’s defenders, veterans, first responders, their families, and those in need. Its latest program, Snowball Express, serves the children of our fallen military heroes, surviving spouses, and Gold Star families. For more information, please visit GarySiniseFoundation.org. In February 2019, Gary’s memoir Grateful American: A Journey From Self To Service was published and debuted on the New York Times bestseller list. The book chronicles his life’s work and how he went from an aimless teenager, to discovering his love for acting and directing, to finding his purpose in life: helping and supporting those who serve. 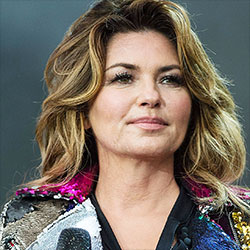 Shania Twain has starred in the 2019 film TRADING PAINT opposite John Travolta and Comedy Central’s popular sitcom Broad City. Five-time GRAMMY winner and the reigning Queen of Country Pop, Shania remains the top-selling female country artist of all time. Her hits include “Any Man of Mine,” “That Don’t Impress Me Much,” “You’re Still the One,” and “Man! I Feel Like A Woman!” Shania’s first album in 15 years, NOW, was released in September 2017 and debuted at No. 1 on the Billboard Top 200 albums. 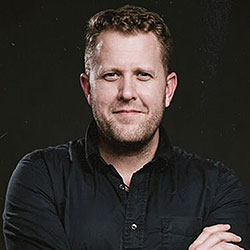 In 2002, Jon Erwin founded a production company with his brother, Andrew. Their first ventures were commercials, documentaries, and music videos. The brothers soon were directing videos and producing concerts and television programs for platinum recording artists such as Amy Grant, Michael W. Smith, Casting Crowns, Switchfoot, Skillet, and others. They received 11 GMA Dove Awards nominations and 3 wins for Music Video of the Year. Jon and Andrew have also produced and directed several documentaries, including the multiple award-winning 9/11 story, THE CROSS AND THE TOWERS. In 2010, Jon and Andrew began exclusively developing dramatic feature films. Their features have all opened in the top-ten box office and they have received the coveted A+ CinemaScore® twice. Their features include OCTOBER BABY, MOMS’ NIGHT OUT, WOODLAWN, and the surprise hit I CAN ONLY IMAGINE, which became the #1 independent film of 2018, earning more than $83 million at the box office. In 2019, Jon and Andrew launched Kingdom Studios, alongside their partners Kevin Downes and Tony Young, with a first-look deal with Lionsgate. The first film from that venture is I STILL BELIEVE, a biopic about CCM megastar Jeremy Camp slated for release on March 13. Jon serves as Chief Executive Officer at Kingdom Studios, as well as writing and co-directing feature films with Andrew. He is also the author of the upcoming book For Love and Honor, which tells the amazing true story of his grandfather Red Erwin, who received the Congressional Medal of Honor in World War II. It is slated for publication in 2020. 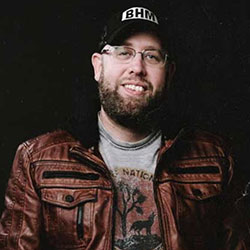 Andrew Erwin, half of the filmmaking duo The Erwin Brothers, began his career as a teenager working for ESPN as a camera operator in his hometown of Birmingham, Alabama. As a sports cameraman, Erwin worked with ESPN College Football Primetime, FOX NFL, and the NBA covering events such as the X Games and the Super Bowl. In 2002, Andrew founded a production company with his brother Jon. Their first ventures were commercials, documentaries, and music videos. The brothers soon were directing videos and producing concerts and television programs for platinum recording artists such as Amy Grant, Michael W. Smith, Casting Crowns, Switchfoot, Skillet, and others. They received 11 GMA Dove Awards nominations and 3 wins for Music Video of the Year. In 2010, Andrew and Jon began exclusively developing dramatic feature films. Their features have all opened in the top-ten box office and they have received the coveted A+ CinemaScore® twice. Their features include OCTOBER BABY, MOMS’ NIGHT OUT, WOODLAWN, and the 2018 smash hit I CAN ONLY IMAGINE. In 2019, Andrew and Jon, with partners Kevin Downes and Tony Young, launched Kingdom Studios along with a first-look deal with Lionsgate. The first film from that venture is I STILL BELIEVE, a biopic about CCM megastar Jeremy Camp slated for release on March 13. Andrew serves as Chief Creative Officer at Kingdom Studios as well as produces and directs feature films with his brother Jon and Kevin Downes. 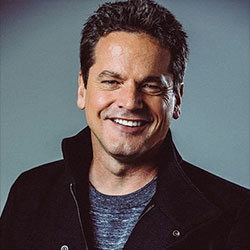 Kevin Downes’ career of producing, acting, directing and writing spans more than 20 years. Some of Kevin’s fan-favorite roles include Officer Shane Fuller in COURAGEOUS, video-game loving Kevin in MOMS’ NIGHT OUT, a series regular role on the TV sitcom HITTING THE BREAKS, and most recently, starring in MALIBU DAN, which airs weekly on WGN, with longtime friend David A.R. White. Kevin has produced three films with the Erwin Brothers, MOMS’ NIGHT OUT, WOODLAWN, and 2018's breakout hit and the #1 box office grossing, independent film of that year I CAN ONLY IMAGINE, starring Dennis Quaid. He produced the critically acclaimed LIKE DANDELION DUST from best-selling author Karen Kingsbury, which starred Academy Award winner Mira Sorvino and won more than a dozen audience awards for best picture at prestigious film festivals around the world. In March 2019, Kevin partnered with the Erwin Brothers and Tony Young to launch Kingdom Studios, a new entertainment company in partnership with Lionsgate that endeavors to create life-changing content from a variety of talented storytellers. 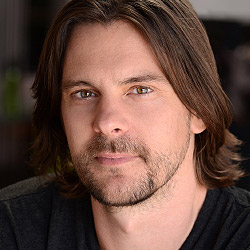 Since graduating with a film degree from Ithaca College in 1995, Jon Gunn has worked as a writer, director, editor and producer. His work ranges from independent comedy and drama to studio tentpoles. As a director, his feature films include MERCY STREETS, MY DATE WITH DREW, LIKE DANDELION DUST, and THE CASE FOR CHRIST, and have grossed more than $40 million at the box office. MY DATE WITH DREW, which had a worldwide theatrical release in the summer of 2005, swept the festival circuit for Best Feature. LIKE DANDELION DUST is a Fox feature drama starring Mira Sorvino and Barry Pepper, which Gunn co-wrote with Oscar-nominated screenwriter Stephen J. Rivele. The film won more than 30 festival awards and was released theatrically in the fall of 2010. THE CASE FOR CHRIST stars Mike Vogel, Erika Christensen, Faye Dunaway, and Robert Forster, and grossed $17 million in theaters. Gunn has also co-written numerous studio movies, including the comedy IAN THE VAMPIRE for Fox Searchlight, THE MAGIC 8 BALL for Paramount, THE NUTCRACKER for Universal, IMAGINARY FRIENDS for Skydance, MONOPOLY for Hasbro/Sony, and multiple features for Dreamworks animation, including ALCATRAZ VERSUS THE EVIL LIBRARIANS and B.O.O. THE BUREAU OF OTHERWORLDLY OPERATIONS, starring Seth Rogen, Melissa McCarthy and Bill Murray. Most recently, Gunn co-wrote the musical biopic I STILL BELIEVE with Jon Erwin, based on the life of singer Jeremy Camp, which will be released by Lionsgate on March 13.